UNIDROIT WORK AND INSTRUMENTS
IN THE AREA OF CULTURAL PROPERTY

Illicit traffic in works of art is by no means a new phenomenon, nor is it confined to any particular part of the world. As a form of crime it is, however, expanding rapidly world-wide, and the emergence of new factors such as the growing demand in the newly affluent States, intentional destruction of monuments and historical sites, greater ease of communication and indeed, the remarkable increase in the value of works of art as a consequence of the influx of capital into the market bodes ill for any attempt to stem the tide, still less turn it. While the urgency of the situation is universally acknowledged, the response in terms of human and financial input and legal protection has fallen far short of what is needed. National laws in the matter differ widely and this diversity is put to good use by traffickers, as is the limited territorial scope of the export bans set in place by individual States.

To overcome these issues and free the art market from any illicit conduct UNIDROIT has been working on the repatriation of illegally traded cultural objects, the establishment of a clear right of ownership of the State over undiscovered artefacts and, lastly, private law issues concerning private art collections. By the time, UNIDROIT has elaborated hard law and soft international tools aiming at setting up best practice standards for the art market. UNIDROIT continues to work in partnership with other international organisations: UNESCO, INTERPOL, UNODC, WCO, ICCROM, national police forces and NGOs, like ICOM. The international co-operation in the field of cultural heritage protection was strengthened with the launch of the Academic Project ("UCAP") which brings together governmental organisations, universities, scholars, law enforcement agencies and practicing lawyers in a trans-academic network.

The second half of the twentieth century and early twenty-first century were marked by increasing attention for the safeguarding of cultural heritage. This interest led to the development of international standards related to the protection of these goods. The 1995 UNIDROIT Convention on Stolen or Illegally...

From the tombs of ancient Egypt to the halls of today’s world-class museums, the practice of art collecting is almost as old as civilization itself. Over the years, to hold a collection of art objects took on various meanings and brought about private law issues. Upon recommendation of the Governing Council (GC 95th session...

UCAP and ESACH - CALL FOR SUBMISSIONS ON THE 1995 CONVENTION

UCAP and ESACH - CALL FOR SUBMISSIONS ON THE 1995 CONVENTION

From 29 June to 1st July 2021, UNIDROIT was invited to attend the first meeting of the Regional Monitoring Committee on the ECOWAS Action Plan for the Return of Cultural Property to their Countries of ...

Ms Marina Schneider, Principal Legal Officer and Treaty Depositary at UNIDROIT attended the regional conference from 29 to 30 June 2021 as part of the celebration of the 50th anniversary of the 1 ...
Load More

The second half of the twentieth century and early twenty-first century were marked by increasing attention for the safeguarding of cultural heritage. This interest led to the development of international standards related to the protection of these goods. The 1995 UNIDROIT Convention on Stolen or Illegally Exported Cultural Objects is one of the main international conventions ever adopted to fight against illicit trafficking in cultural property.

The 1995 Convention, by virtue of its international private law approach to the matter of the illegal trade in stolen or illegally exported goods deals with the repatriation of such objects compromising between opposing legal systems. It guarantees uniform rules of private law and international procedure which make it possible to apply the principles set in the UNESCO Convention on the Means of Prohibiting and Preventing the Illicit Import, Export and Transfer of Ownership of Cultural Property (1970). The two Conventions are at once compatible and complementary. The 1995 Convention also provided the basis for the European development in the field. The international principles set by the 1995 Convention were taken, firstly, by Directive 93/7/EEC and, later on, by its recast of 2014 (Directive 2014/60/EU). 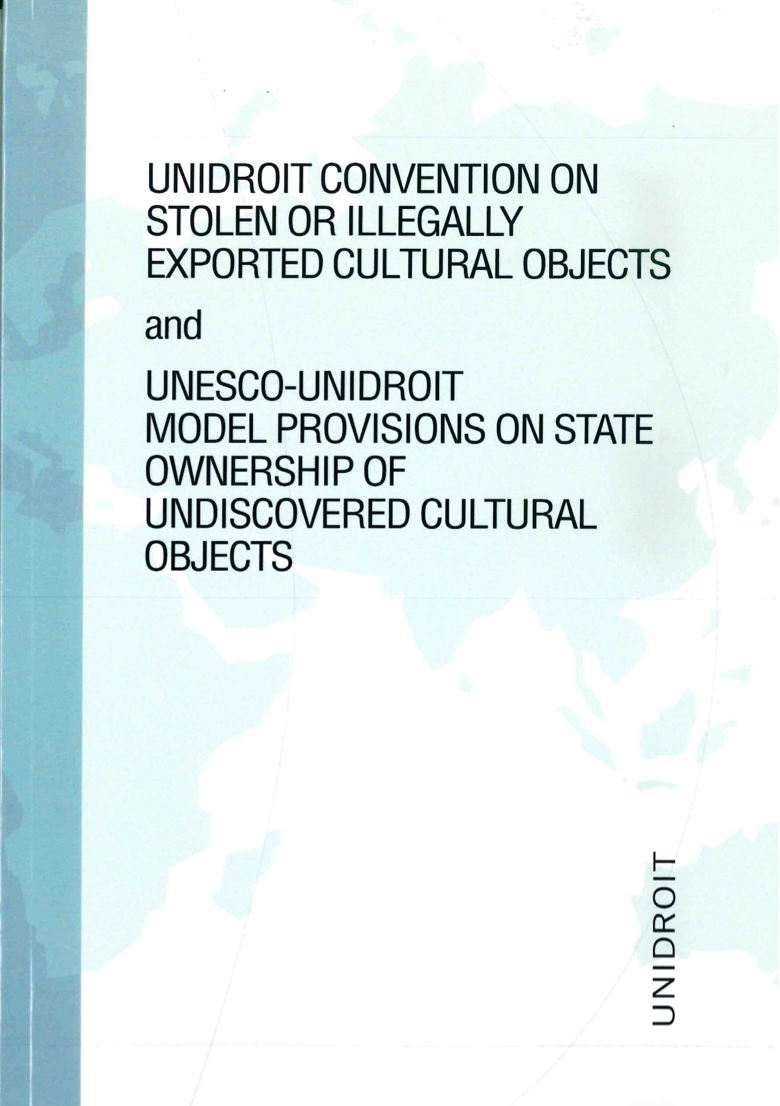 The Model Provisions on State Ownership of  Undiscovered Cultural Objects are intended to assist States in adopting effective legislation for the establishment and recognition of the State’s ownership of undiscovered cultural objects with a view, inter alia, to facilitating restitution in case of unlawful removal. They are followed by guidelines aimed at better understanding the provisions.

These provisions are a legal soft law tool made available to all States to adopt sufficiently explicit legal principles to guarantee their ownership of such objects. It is also a tool aimed at facilitating the application of the 1995 UNIDROIT Convention and the 1970 UNESCO Convention. In developing or strengthening their national legislation, States are encouraged to integrate these provisions into their own body of law or adapt them nationally in accordance with their specific legal traditions.

From the tombs of ancient Egypt to the halls of today’s world-class museums, the practice of art collecting is almost as old as civilization itself. Over the years, to hold a collection of art objects took on various meanings and brought about private law issues.

Upon recommendation of the Governing Council (GC 95th session, 18-20 May 2016) the topic of private art collections was inserted in the UNIDROIT Work Programme for the 2017-2019 triennium by the General Assembly with a low level of priority (GA 75th session, 1 December 2016).

From that moment on, UNIDROIT has hosted a conference on Private Collections: Historical and Legal Perspectives (March 2017) and is currently considering future steps as well as collaborative partnership to support the study of legal issues related to private art collections.

UCAP aims at promoting a favourable legal environment for restitution and return of stolen or illegally exported cultural objects through knowledge sharing and dissemination, as well as projects pursued individually by the partners and members or on the basis of joint initiatives. UCAP also seeks to assist practising lawyers, judges, other government officials, as well as art market players, such as art collectors, dealers, auction houses and museums by providing information about the legal framework protecting cultural property.

Taking a step further into cultural heritage education, studies and research carry out by the means of UCAP will facilitate the identification of best practices in the art market in order to provide innovative means of implementation of the aforementioned instruments.

Connect with us on: