UNIDROIT WORK AND INSTRUMENTS IN THE AREA OF SECURED TRANSACTIONS

UNIDROIT is very active in the field of secured transactions and has adopted several conventions, model laws, legislative guides, and other instruments in this area.

In particular, UNIDROIT is very well known for the success of the Cape Town Convention system. Designed to enhance security for the acquisition and financing of high value equipment, the Cape Town Convention on International Interests in Mobile Equipment was adopted in 2001 and presently has over 80 Contracting States and the support of 1 one regional economic integration organisation.

The Convention on International Interests in Mobile Equipment (Cape Town Convention) has been regarded as one of the most impactful developments in commercial treaty law over the past 50 years and has the capacity to result in billions worth of economic benefits for contracting States. The Convention itself is an umbrella treaty furthered by Protocols relating to specific industries:

UNIDROIT also has other instruments that deal with Secrued Transactions Law. These include instuments on Factoring, Franchising, and other issues. Additionally, UNIDROIT also presently has several ongoing projects in this area.

Learn more about the 1988 UNIDROIT Convention on International Financial Leasing.

Learn more about the 1988 UNIDROIT Convention on International Factoring. 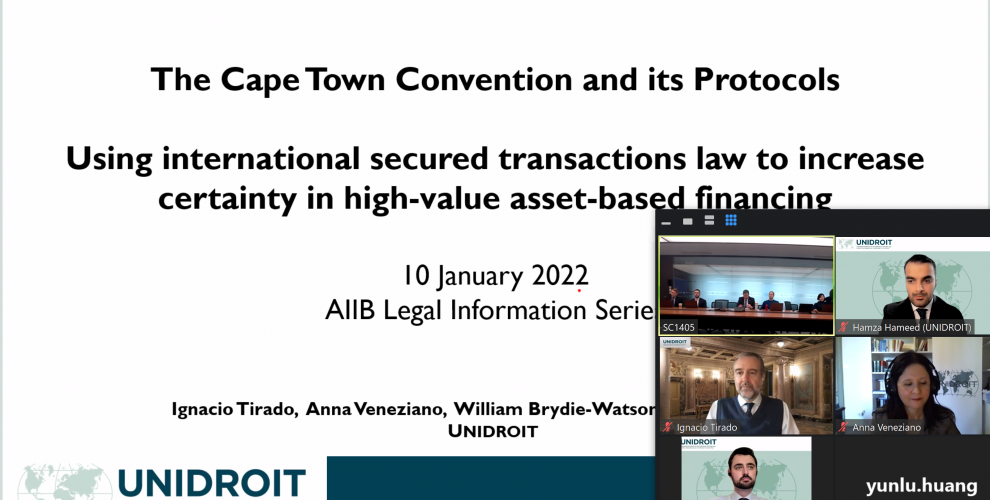 The instrument of accession to the 1995 UNIDROIT Convention has… 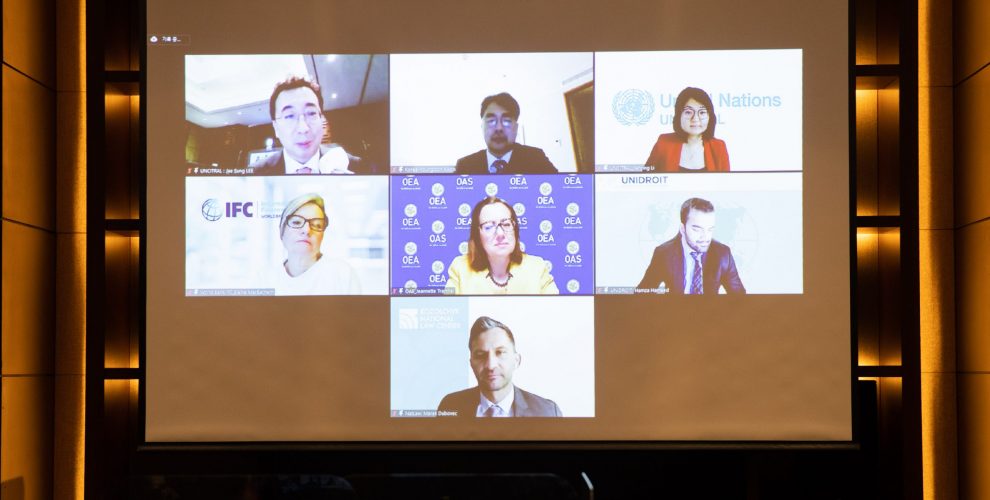 The Convention on International Interests in Mobile Equipment (Cape Town Convention) has been regarded as one of the most impactful developments in commercial treaty law over the past 50 years and has the capacity to result in billions worth of economic benefits for contracting States. The Convention itself is an umbrella treaty furthered by Protocols relating to specific industries:

The purpose of the Cape Town Convention and its various Protocols is to provide an international secured transactions regime applicable to the trade of high value, mobile, and uniquely identifiable equipment. The system functions through the creation of different international registries under each Protocol to enable the creation, registration, and enforcement of priority rights within assets of a registrable nature. This in turn adds an international guarantee to financiers within these industries towards their assets hence allowing them to lend with confidence and at lower rates. The primary objectives of the Cape Town Convention are:

The Cape Town Convention Academic Project seeks to assist scholars, students, practicing lawyers, judges and other government officials, and industry by providing information on and education about the Convention and its Protocols. The Project is a joint undertaking between the University of Oxford Faculty of Law and the University of Washington School of Law. The repository and journal are under the joint auspices of the Project and UNIDROIT. Learn more about the project by clicking the image below:

Click Here to Learn More About the Cape Town Convention

Designed specifically to facilitate asset-based financing and leasing of aviation equipment, the Aircraft Protocol of the Cape Town Convention expands financing opportunities available to entities looking to build their fleets, and reduces the costs associated with acquiring finance to do so, thereby providing substantial economic benefits for operators and the economies within which they function.

For debtors, the Cape Town Convention and its Aircraft Protocol:
– Reduce the cost of borrowing and getting access to finance by providing a secure ecosystem for creditors to lend in;
– Broaden the options available for acquiring finance for aircraft objects by allowing lenders from different jurisdictions to securely invest worldwide;
– Create opportunities to upgrade to a more modern and cost effective fleet hence reducing the cost of doing business and increasing profit margins;
– Making it easier to compete with other players on the international market by creating an equally opportune system of financing;
– Allowing for greater security in the purchasing or leasing of second-hand or old aircraft objects.

Click Here to Learn More About the Aircraft Protocol

The Luxembourg Protocol to the Convention on International Interests in Mobile Equipment on Matters Specific to Railway Rolling Stock establishes a secured transactions regime for trade within the rail industry. It creates a new type of global security interest for railway rolling stock, internationally recognised with established priorities. This interest can be registered in an online public registry and creates a common system for enforcing creditor rights on debtor default or insolvency.

Scope of the Protocol

– To all rolling stock (broadly defined) – “..vehicles movable on a fixed railway track or directly on, above or below a guideway” – covers:
– Inter-urban and urban rolling stock;
– Specialist boring equipment and other rail mounted equipment;
– Metro trains;
– People movers/shuttles at airports;
– Cranes at ports;
– Cable cars and trams

Click Here to Learn More About the Rail Protocol

The Space Protocol of the Cape Town Convention is an international regime of secured transactions designed specifically for the space industry. It introduces a uniform and transparent scheme to improve creditors’ rights and hence facilitating the flow of capital into the space sector. Based largely on the Aircraft Protocol of the Cape Town Convention, the Space Protocol has been adapted to specifically suit the needs of the space industry while respecting the public service aspect of space activities.

How does it work?

The Space Protocol creates a uniform regulatory regime for the recognition and protection of security interests in space assets. This ensures that issues such as conflict of laws or differing insolvency remedies, that are normally encountered in asset-based financing, are surpassed.

It provides uniform rules for the creation, registration and priority of legal interests in space assets, as well as facilitating expeditious and efficient enforcement of remedies in the event of a default or insolvency of the debtor. At the same time, it ensures that adequate protection is given to public services that are offered through space assets and that the same are not interrupted due to an immediate exercise of the creditor’s right.

– The creation of an international registry for space assets which will allow debtors and creditors to register international interests in space assets;
– The creation of a global system of internationally enforceable security interests in space assets;
– The provision of an ecosystem where financiers and investors can confidently give their money to companies in the space sector;
– The availability of an international regime onto which domestic laws can be based on in order to provide secured lending for the space industry.
– The ability for developing countries and emerging markets to develop their space industries.

Click Here to Learn More About the Space Protocol

The future fourth Protocol of the Cape Town Convention for Matters Specific to Mining, Agriculture and Construction Equipment (MAC Protocol) is one of UNIDROIT’s most high priority projects at the present moment.

The development of the MAC Protocol has benefitted significantly from the involvement of the global MAC industries. The MAC Working Group, established in 2014, has 12 member companies, and organisations representing the interests of more than 10,000 companies doing business on six continents. This interest on behalf of the MAC industries validates the potential benefits which the MAC Protocol would accrue once it enters into force.

How does it work?

The MAC Protocol will work very    similarly     to the Aircraft Protocol such that it will create an international electronic registry which will allow creditors to protect their legal interests over high value MAC equipment, regardless of its location. The MAC Protocol provides uniform rules governing the creation, registration and priority of legal interests in MAC equipment, as well as facilitating expeditious and efficient enforcement of remedies in the event of a default or insolvency of the debtor. The types of interests which can be created are similar to those under the Aircraft Protocol as the definition of an international interest stems from Article 2 of the Convention and not any particular Protocol. Certain caveats are included to specifically cater to the requirements of the MAC industries such as an exclusion on interests over inventory.

The MAC Protocol will allow financiers to easily access more markets and provide credit globally at cheaper rates. This will allow end users of MAC equipment to gain greater access to capital hence bolstering their production and in turn, the economy of the State in which they function.

It benefits the entire MAC sector such that all the entities involved will have increased access to modern MAC equipment at a lower cost; manufacturers will hence be able to increase their output; dealers will be able to export to new markets; and financiers will have more confidence in issuing credit.

Current Status and Future Developments
The MAC Protocol has presently undergone two meetings of its Committee of Governmental Experts over the course of 2017. UNIDROIT anticipates to have a Diplomatic Conference in 2019 to which all Member States of the UN will be invited.

Presently, there are opportunities to learn more about the legal rules being created and to understand their impact. Moreover, there is also a subgroup of the Committee of Governmental Experts reviewing the HS Codes to be included in the final draft of the MAC Protocol.

Click Here to Learn More About the MAC Protocol