Factoring is a vitally important type of financing used across the globe. In 2019, global factoring volume reached 2.9 trillion euros. While Europe accounts for majority of the world’s domestic volume of factoring (67%), new markets account for the highest growth in factoring volume, with the leading regions being the Middle East (12.4%), Africa (10.8%) and South America (8.9%). 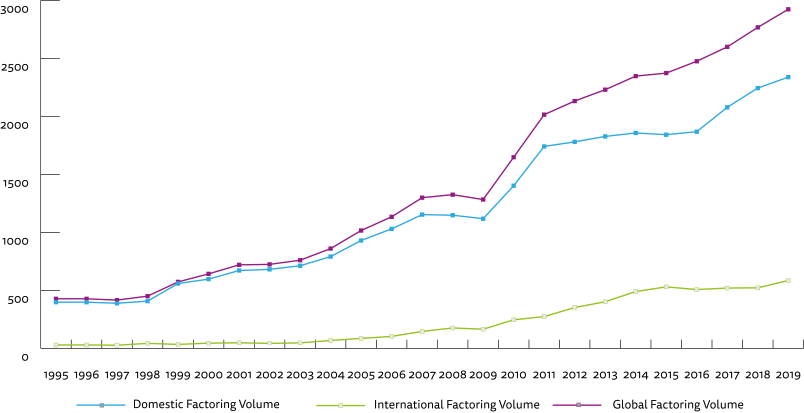 In 1988 the UNIDROIT Convention on International Factoring was adopted in Ottawa, Canada. The Factoring Convention entered into force in 1995 and has been ratified by 9 States. However, international factoring represents only 21% of global factoring volume, whereas domestic factoring accounts for 79%. Despite the growing importance of factoring, no intergovernmental organisation has adopted a factoring model law to assist States in undertaking reforms to improve their domestic legal frameworks.

i.   The use of factoring as an important form of financing increasing access to credit;
ii.  Ongoing constraints in access to credit as a limit on economic growth, particularly in
developing countries and emerging markets; and
iii. The gap that currently exists in international rules and standards regarding factoring.
The proposal noted that existing instruments largely focus on international or cross-border
transactions and do not provide sufficient guidance to States to develop functional
domestic factoring frameworks.

At its 98th session in May 2019, the UNIDROIT Governing Council approved the project for the 2020-2022 Triennial Work Programme as a high priority project.

The purpose of the Model Law is to provide an instrument for States that want to introduce a new factoring law or update their existing laws but are not yet in a position to undertake a comprehensive secured transactions law reform. The instrument will consist of a set of black letter rules, accompanied by a limited commentary on each rule to explain its operation.

As consistent with the Institute’s established working methodology, the Factoring Model Law is being developed by a Working Group composed of international legal experts representing different legal systems. The Working Group is chaired by member of the Governing Council Professor Henry Gabriel and is composed of the following experts:

In addition, several international, regional and private organisations with expertise in factoring have been invited to observe the Working Group:

The first session of the Working Group took place via videoconference between 1 and 3 July 2020. The Working Group was attended by 32 participants, comprising of (i) 9 Working Group Members, (ii) 18 observers from six international, regional and intergovernmental organisations, four industry associations and academia and (iii) 5 members of the UNIDROIT Secretariat.

The documents for the first meeting can be found below:

The Second Session of the Working Group will take place on 14-16 December 2020.

The following documents have been made available for the second session: