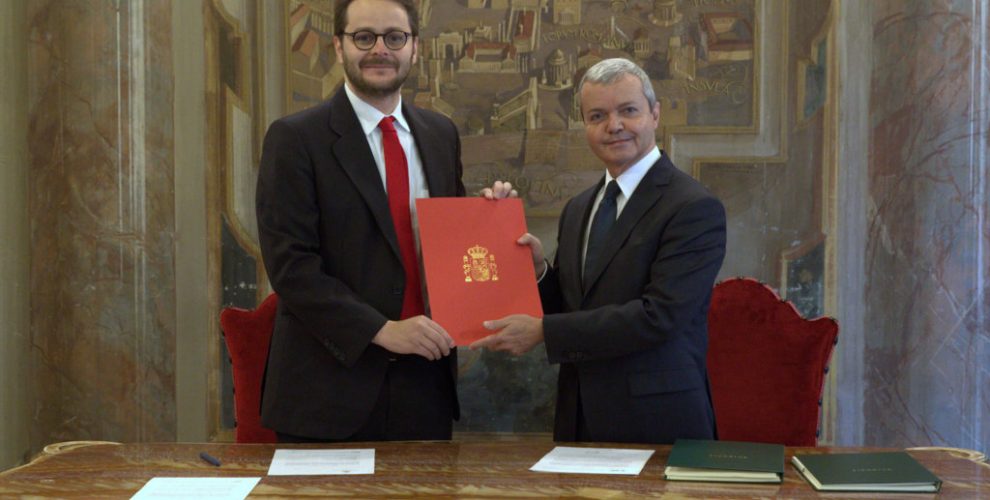 On 15 December 2015, Mr. Juan Claudio de Ramon, First Secretary with the Embassy of Spain to Italy handed over to the Secretary-General the original copy of the instrument of accession of the Kingdom of Spain to the Protocol to the Convention on International Interests in Mobile Equipment on Matters specific to Aircraft Equipment (Aircraft Protocol), which UNIDROIT had provisionally received on 27 November 2015, together with declarations under Articles XIX(1), XXIX and XXX(1). The Aircraft Protocol will enter into force for Spain on 1 March 2016. The Secretary General also received the original of the subsequent declarations under Articles 39(1)(a)-(b), 40 and 53 of the Convention on International Interests in Mobile Equipment, which shall take effect on 1 June 2016.
In receiving the instrument, the Secretary-General noted the quick progress made by European countries in the implementation of the Cape Town Convention in recent years, as the Spanish accession follows in less than six months those of the United Kingdom and Denmark. Spain is not only an important aviation market, he said, but an important intercontinental hub, and its natural competitive advantages would be further boosted by offering its airlines access to efficient asset-based financing.
Further details about the Aircraft Protocol and the Convention are available at:
– “Depositary Functions of UNIDROIT – Cape Town Convention”
– “Depositary Function of UNIDROIT – Aircraft Protocol”