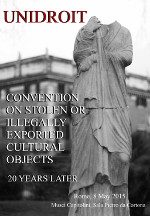 Registration for the Conference is closed (no places available). A waiting list is being established and the UNIDROIT Secretariat will confirm possible participation. The access to the Conference room at the Capitoline Museum will not be authorised without confirmed registration.

Thank you for your understanding.

The fight against illicit trafficking of cultural objects is not only a priority, but also a collective responsibility.

Illicit trafficking of cultural property is a scourge that is constantly expanding and taking on new forms. Fighting it is more than a mere political commitment priority. The twentieth anniversary of the 1995 Convention provides an opportunity to assess the significance, the distinctive features and operational aspects of this normative instrument and its interaction with others, including the 1970 UNESCO Convention on the Means of Prohibiting and Preventing the Illicit Import, Export and Transfer of Ownership of Cultural Property and the 2014 European Directive on the return of cultural objects unlawfully removed from the territory of a Member State.

It is important, in this context to acknowledge that essential rules are already in place, and that focus is now required in ensuring that they are better known and applied.

CAPE TOWN CONVENTION – ACCESSION BY THE REPUBLIC OF COTE D’IVOIRE