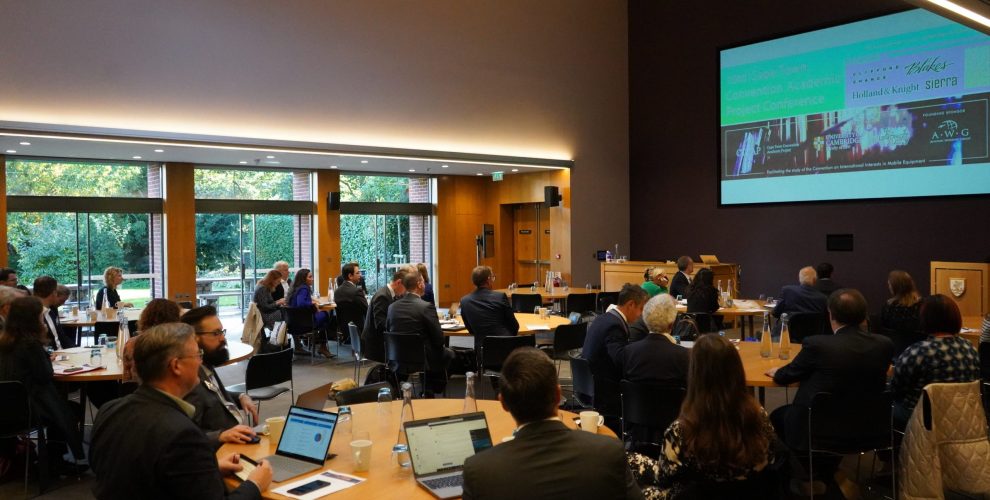 The 10th Annual Cape Town Convention Academic Project Conference took place at Robinson College, University of Cambridge, and on Zoom on 29-30 September 2021. The Conference was organised by the Cape Town Convention Academic Project, which a partnership between UNIDROIT and the University of Cambridge Faculty of Law, under the auspices of the Centre for Corporate and Commercial Law (3CL). The Aviation Working Group is the founding sponsor of the project.

The Conference had 173 registered participants, 60 of which attended in person, with the rest participating via Zoom. The first day of the Conference featured commemorations of the 20th anniversary of the adoption of the Convention on International Interests in Mobile Equipment (the ‘Cape Town Convention’ or ‘CTC’) and its Protocol related to Aircraft Equipment (the ‘Aircraft Protocol’ or ‘AP’). This included a welcome address by the President of UNIDROIT, Professor Maria Chiara Malaguti, and a Keynote Address by Professor Sir Roy Goode.

This was followed by an examination of ‘The Impact of the CTC in a post-pandemic world’ by the Secretary-General of UNIDROIT, Professor Ignacio Tirado. Thereafter, Professor Louise Gullifer and Dr Anton Didenko welcomed input from the attendees on areas of possible future research relating to the CTC which could be conducted under the auspices of the Academic Project.

Registered participants can access all the Conference material at: https://ctcap.org/conference-participants-panel/. Learn more about the Cape Town Convention Academic Project and its activities at: www.ctcap.org.