IN THE AREA OF CONTRACT LAW

UNIDROIT has worked extensively in the area of contract law and adopted a variety of instruments intended to offer harmonised and effective rules to respond to the evolving needs of modern transactions. The UNIDROIT Principles of International Commercial Contracts (UPICC) constitute a non-binding codification or “restatement” of the general part of international contract law, adapted to the special requirements of modern international commercial practice.

UNIDROIT is associated in the preparation of “Principles of Reinsurance Contract Law (PRICL)” conducted by a Group of scholars and practicing lawyers from the global insurance and reinsurance markets. The proposed new principles should refer to the UNIDROIT Principles of International Commercial Contracts as the general part of contract law.

- the  UNIDROIT Convention on International Factoring (1988)

On 9 October 2020, Secretary General Ignacio Tirado provided a closing speech at the II International Congress of Insurance Law, which was co-hosted by ICADE Business School, the Faculty of Econo ...

A PRICL Mock Arbitration on the Principles of Reinsurance Contract Law (PRICL), was organised by AIDA Europe, in cooperation with the PRICL Project Group, the AIDA Reinsurance Working Party and the AI ...

On 22 September 2020, the UNIDROIT Secretariat hosted a Hybrid International Conference illustrating the contribution of HCCH, UNCITRAL and UNIDROIT to the harmonisation of the law of international sa ...
Load More

The UNIDROIT Principles of International Commercial Contracts (UPICC) constitute a non-binding codification or “restatement” of the general part of international contract law. They provide a balanced set of rules adapted to the special requirements of modern international commercial practice and are designed for use throughout the world irrespective of the legal traditions and the economic and political conditions of the countries in which they are to be applied.

The latest edition of the UNIDROIT Principles published in 2016 consists of 211 Articles in 11 Chapters, covering the following topics: General Provisions, Formation and Authority of Agents, Validity, Interpretation, Content, Third Party Rights and Conditions, Performance, Non-performance, Assignment of Rights, Transfer of Obligations, Assignment of Contracts, Limitation Periods, Plurality of Obligors and of Obligees. The black-letter rules of the Principles are accompanied with commentary and examples to illustrate how the rules operate in practice.

Welcomed from their first appearance as “a significant step towards the globalisation of legal thinking”, over the years the UNIDROIT Principles have been well received not only by academics but also in practice, as demonstrated by the numerous court decisions and arbitral awards rendered world-wide that refer in one way or another to the UNIDROIT Principles. They have also served as a model for many domestic legal reforms and other law-harmonisation initiatives. 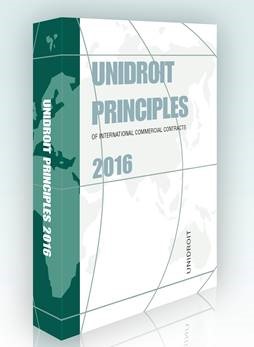 Model Clauses for the Use of the UNIDROIT Principles (UPICC)

The Model Clauses are an accompanying instrument to the UNIDROIT Principles of International Commercial Contracts: they provide guidance to parties intending to indicate in their contract more precisely in what way they wish to see the UNIDROIT Principles used during the performance of the contract or applied by judges and arbitrators when a dispute arises.

(i) to choose the UNIDROIT Principles as the rules of law governing the contract;

(ii) to incorporate the UNIDROIT Principles as terms of the contract;

(iii) to refer to the UNIDROIT Principles to interpret and supplement the CISG when the latter is chosen by the parties, or

(iv) to refer to the UNIDROIT Principles to interpret and supplement the applicable domestic law, including any international uniform law instrument incorporated into that law.

Where appropriate, for each Model Clause two versions are proposed, one for inclusion in the contract (“pre-dispute use”) and one for use after a dispute has arisen (“post-dispute use”). 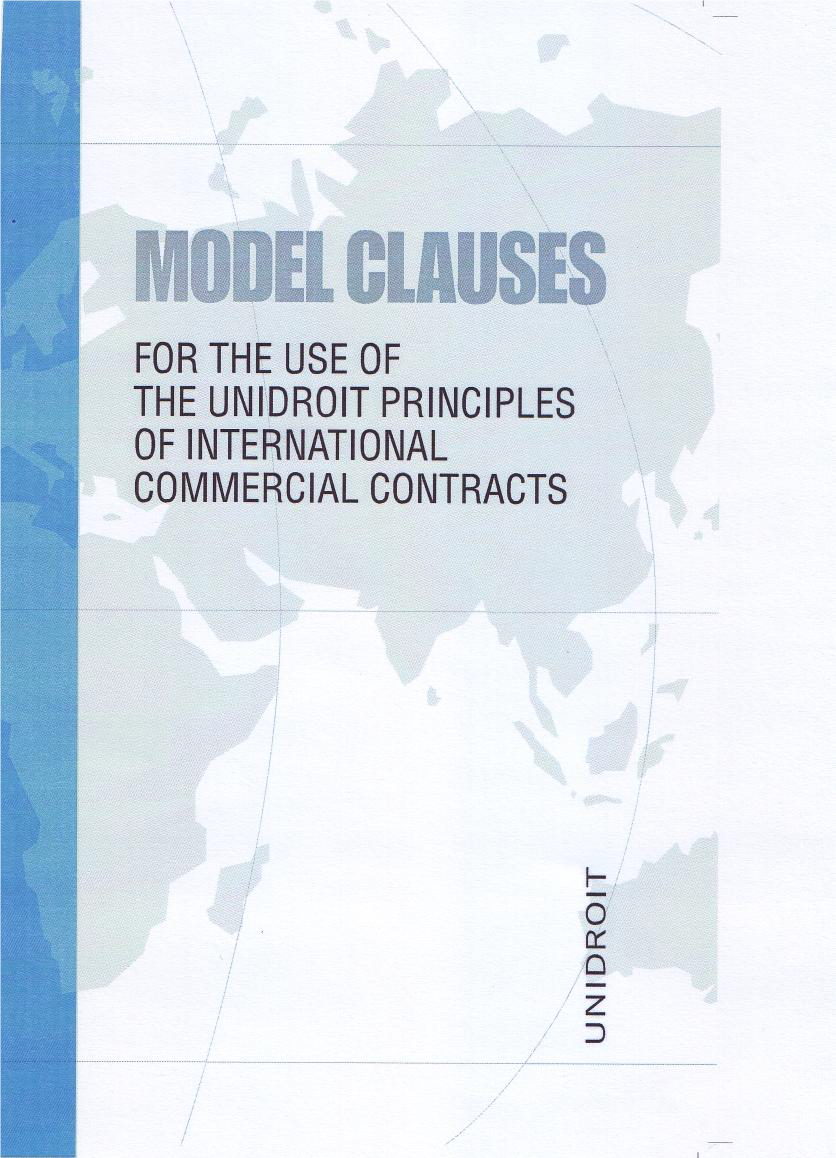 The purpose of the project is to formulate a “restatement” of existing global reinsurance law, which is largely embedded in international custom and usage, but is seldom the object of legislation. The project leaders expressed the view that the proposed principles presupposed the existence of adequate rules of general contract law. Rather than attempting to re-create such rules, the proposed new principles should refer to the UNIDROIT Principles of International Commercial Contracts as the general part of contract law.  Following the Governing Council’s recommendation, the topic was included in the UNIDROIT Work Programme for the triennium 2017-2019 by the General Assembly.

The participants at the first workshop of the Project Group (Zürich, 27-30 January 2016) agreed that specific principles and comments should be drafted on the following topics: choice-of-law, non-disclosure, errors and omissions, conditions precedent, event/accumulation/aggregation, late notice, back-to-back cover, “follow the fortunes” and “follow the settlement” principles, cooperation, time bar rule, termination and recapture, extra contractual obligations of the reinsured. The Group met on several occasions and is to complete the formulation of PRICL by the year 2018. The final form and means of publication of the PRICL are still under consideration.

For an overview of the project see the UNIDROIT PRICL webpage

The UNIDROIT Guide to International Master Franchise Arrangements was first published in September 1998, a second edition in English following in 2007. The purpose of the Guide is to spread knowledge with a view to providing all those who deal with franchising, whether they be franchise operators, lawyers, judges, arbitrators or scholars, with a tool for the better understanding of the possibilities franchising, master franchising in particular, offers. In particular it aims to assist parties in negotiating and drawing up international master franchise agreements by identifying the legal issues involved in those agreements, discussing possible approaches to the issues and, where appropriate, suggesting solutions which the parties may wish to consider.

The Model Franchise Disclosure Law: building upon the work of preparation of the Guide to International Master Franchise Arrangements, the Model Franchise Disclosure Law was drafted to provide guidance to domestic legislators willing to address the imbalance in relationships between the franchisor and its franchisees or the sub-franchisor, and the risks of sharp or abusive practices occurring on the part of the franchisor regarding the information prospective investors are required to disclose prior to entering into the agreement.

The Governing Council of UNIDROIT adopted the Model Franchise Disclosure Law finalised by a Committee of Governmental Experts, together with the Explanatory Report thereto, on 25 September 2002. 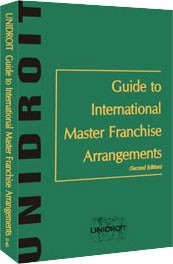 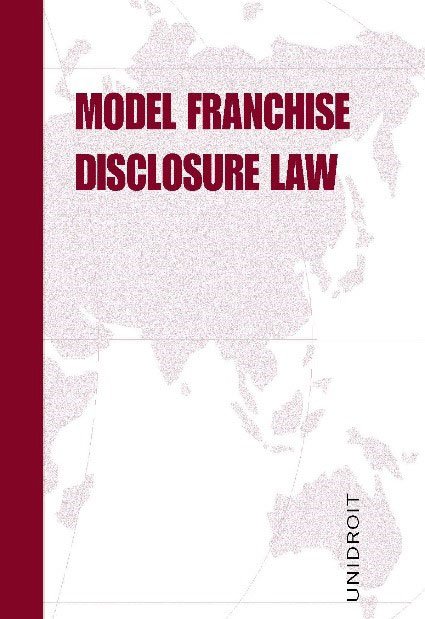 The UNIDROIT Convention on International Financial Leasing and the UNIDROIT Convention on International Factoring were prepared in parallel and were both adopted in Ottawa on 28 may 1988. They intend to provide harmonised rules for transactions which are regulated under different legal regimes in domestic law, thus facilitating the cross-border financing of equipment (financial leasing) and the mobilization of receivables (factoring) based on an international contract for the supply of goods or services.

The UNIDROIT Model Law on Leasing: Building upon the work of preparation of the UNIDROIT Convention on International Financial Leasing, the UNIDROIT Model Law on Leasing intends to present harmonised legal regulations of leasing on a global basis in order to facilitate trade in capital goods, for consideration by national legislators. The Model Law focusses on the private law aspects of leasing, covering an extended range of assets used in commercial transactions, including both financial leases and non-financial leases.

The Model Law was adopted at a Joint Session of the UNIDROIT General Assembly and the UNIDROIT Committee of governmental experts for the finalisation and adoption of a draft model law on leasing (Rome, 10-13 November 2008) 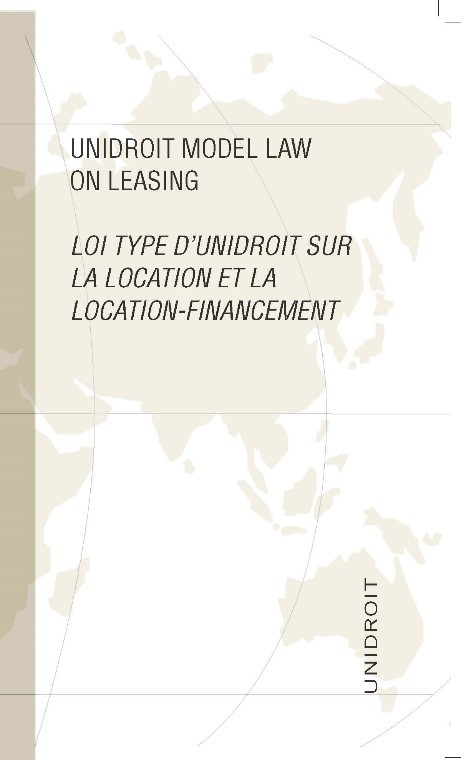 Connect with us on: