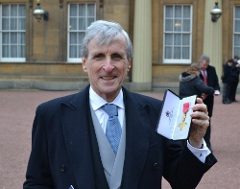 On 29 December 2012 Mr M.J. Stanford, former Deputy Secretary-General of Unidroit, was appointed an Officer of the Most Excellent Order of the British Empire (OBE) by Her Majesty The Queen, for services to the international unification of law.
On 26 March 2013, at Buckingham Palace, Mr Stanford was invested by Her Majesty with the insignia of an OBE.
This photograph shows Mr Stanford with the said insignia in the Quadrangle of Buckingham Palace immediately after the investiture.