On 4 and 5 June, UNIDROIT attended the Fifth Meeting of the Stakeholders’ Committee of the European Year of Cultural Heritage, organised by the European Commission and held in Brussels. On that occasion, the Commission interviewed the stakeholders for contributions to the New European Agenda for Culture.

On 30 May, Ms Marina Schneider, UNIDROIT Senior Legal Officer and Treaty Depositary, participated in the Workshop on Protecting Iraqi Cultural Heritage and Fighting Terrorism organised by the Technical Assistance and Information Exchange Instrument of the EU Commission.

Between 28 and 31 May 2018, Ms Marina Schneider, UNIDROIT Senior Legal Officer and Treaty Depositary, participated in the 6th Session of the Subsidiary Committee of the Meeting of States Parties to the 1970 Convention and the 21st Session of the Intergovernmental Committee for Promoting the Return of Cultural Property to its Countries of Origin or its Restitution in case of Illicit Appropriation (ICPRCP), held at UNESCO Headquarters in Paris.

CONFERENCE ON THE ILLEGAL TRAFFICKING OF CULTURAL GOODS

On 23 May, Ms Marina Schneider, UNIDROIT Senior Legal Officer and Treaty Depositary, was invited by Ms Sabine Verheyen and Mr Arndt Kohn, currently serving as Members of the European Parliament, to a Conference on the illegal trafficking of cultural goods, held at the European Parliament (Brussels). Mr Pierre Moscovici, European Commissioner for Economic and Financial Affairs, Taxation and Customs, representatives of UNESCO, WCO and the art market also attended the debate.

On that occasion, the new proposal for Regulation on the import of cultural goods in the European Union was also discussed.

On 10-11 May 2018, UNIDROIT participated in a two-day workshop for militaries on “Preserving Cultural Heritage for International Peace and Security” held in Rome (Italy) and organised by the Italian Center for Higher Defence Studies, the country’s highest-ranking study institution in the field of managerial training, and security and defense studies. 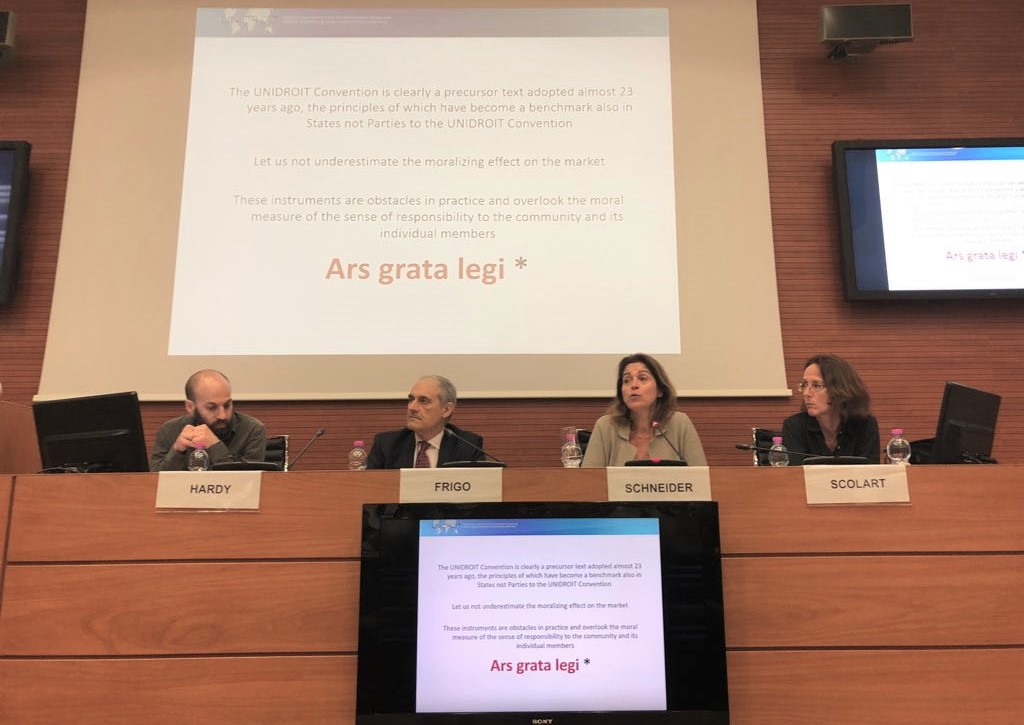 Beirut, Lebanon: on 16-20 April 2018, UNIDROIT is participating in the “Training Program for Specialist Working to Deter Cultural Property Theft and the Illicit Trafficking of Antiquities” organised by UNESCO and funded by UNESCO’s Heritage Emergency Fund.

The Training Program aims to counter antiquities trafficking in the Levant by providing a distilled version of signature professional skills programme for governmental and academic heritage decision makers who work in destabilized source countries where illicit antiquities originate.

On 20-21 March, UNIDROIT participated in a two-day capacity-building conference on “Engaging the European art market in the fight against the illicit trafficking of cultural property” held at UNESCO HQ, Paris. The joint European Union (EU)-UNESCO project aims at reinforcing the exercise of due diligence conduct in the European art trade while sensitizing relevant stakeholders to the different implications of the unlawful trade regarding terrorism financing, organized crime and money laundering.

After the conference, a knowledge-sharing online platform on the issue was created. This Massive Open Online Course (MOOC) comprise relevant information on how to engage in the fight against the illicit trafficking of cultural property – also focusing specifically on the role of due diligence.

On 23 and 24 January 2018, UNIDROIT participated in the International Training Seminar on Reduction of Shadow Economy Related to Illegal Turnover of Cultural Objects, organised by the Latvian School of Public Administration, in cooperation with the Italian Carabinieri TPC, INTERPOL, UNESCO, UNODC, UNIDROIT and other institutions, in Riga, Latvia.