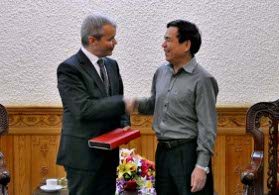 On 18 April 2013, the Secretary-General of UNIDROIT, Mr José Angelo Estrella Faria, visited the Ministry of Justice of Vietnam, where he met the Deputy Minister, Mr Hoang The Lien, to discuss Vietnam’s development in the process of international integration and law reform, including on private international law and commercial law matters, the potential interest of various UNIDROIT instruments for Vietnam, and the prospects for deeper cooperation between UNIDROIT and Vietnam. Earlier that day, the Secretary-General had meet officials of the Ministry of Transport to examine questions related to the 2001 Convention on International Interests in Mobile Equipment (Cape Town Convention) and its Protocol on Matters specific to Aircraft Equipment, as well as officials of the Ministry of Culture, Sports and Tourism, who showed interest for the 1995 UNIDROIT Convention on Stolen or Illegally Exported Cultural Objects.

OFFICIAL COMMENTARY ON THE CONVENTION ON INTERNATIONAL INTERESTS IN MOBILE EQUIPMENT AND PROTOCOL THERETO ON MATTERS SPECIFIC TO AIRCRAFT EQUIPMENT
Comments are closed.