Togo deposited its instrument of accession to the 1995 UNIDROIT Convention with the Italian Government, Depositary of the Convention, on 3 September 2021 and the Convention will enter into force for Togo on 1 March 2022.

This accession strengthens the legal framework to protect the heritage of Togo and to fight against illicit trafficking in cultural objects.

-> Further details about the Convention are available at page

-> The complete status of the Convention is available at page

By acceding to the Convention, Togo takes a new important step forward in the process of improving its legal framework for heritage protection in providing specific mechanisms for the future facilitating the restitution and return of stolen and illegally exported cultural objects.

Accession also comes in the wake of the debates underway in particular within the Economic Community of West African States (ECOWAS) and more particularly within the framework of the “2019-2023 Action Plan for the return of African cultural property to their countries of origin” which calls on its Member States to ratify, as soon as possible, the 1995 UNIDROIT Convention.

The Acting ECOWAS Commissioner for Education, Science and Culture, Mr. Mamadou Traoré, visited Togo on 4 May 2021 as part of the ECOWAS Advocacy for the return of cultural objects to their countries of origin. On this occasion, he met with the Minister of Culture and Tourism of Togo, Dr Kossi Gbényo Lamadokou, to discuss the strengthening of the legal framework, in particular the accession to the 1995 UNIDROIT Convention for the return of cultural property. This was followed by a technical meeting between the Togolese authorities and the ECOWAS and UNIDROIT Secretariats. 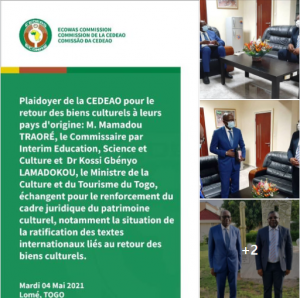 UNIDROIT AT FOURTH MEETING OF UNECE GROUP OF EXPERTS ON THE PERMANENT IDENTIFICATION OF RAILWAY ROLLING STOCK
Comments are closed.