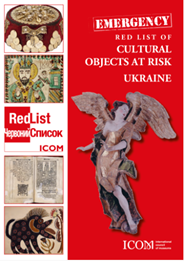 In April 2022, UNIDROIT, joining UNESCO and other partners (UNODC, INTERPOL, WCO and CINOA), called upon professionals and the public involved in the trade of cultural property to refrain from acquiring or taking part in the import, export or transfer of ownership of cultural property when they have reasonable cause to believe that the objects have been stolen, illegally alienated, clandestinely excavated or illegally exported from Ukraine. Indeed, particularly in times of armed conflict, measures to protect cultural heritage should be reinforced, notably in the framework of the international instruments to fight illicit trafficking in cultural objects.

Due diligence of all actors on the art market is key to fight illicit traffic. The 1995 UNIDROIT Convention on Stolen or Illegally Exported Cultural Objects gives criteria for the determination of due diligence in acquiring a cultural object, one of which being the consultation by the potential buyer of “any relevant information and documentation which it could reasonably have obtained”. ICOM Red Lists are an incredible tool to prevent buying objects illegally put on the market by raising awareness on the most vulnerable categories of objects of a country or a region. A very useful tool to fight the illicit traffic in cultural property and assist in exercising due diligence!

Today the International Council of Museums (ICOM) is launching the Emergency Red List of Cultural Objects at Risk – Ukraine and UNIDROIT congratulates ICOM, its long-standing partner in the fight against illicit traffic in cultural objects, and all the persons and institutions involved in its preparation, for this new tool and urges all to disseminate this Emergency Red List and use it to preserve the cultural heritage particularly at risk in Ukraine, so as all ICOM Red Lists.